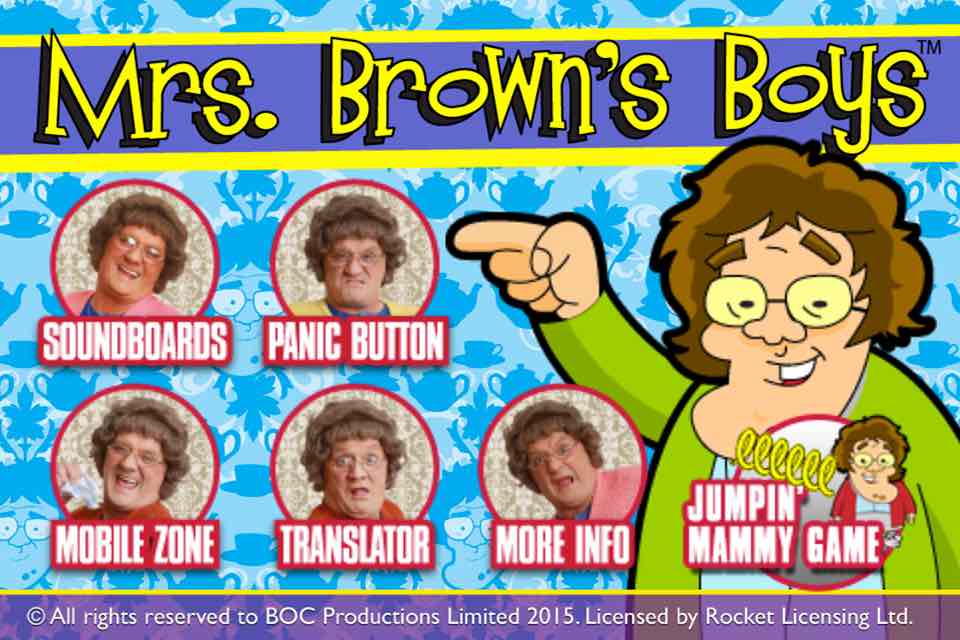 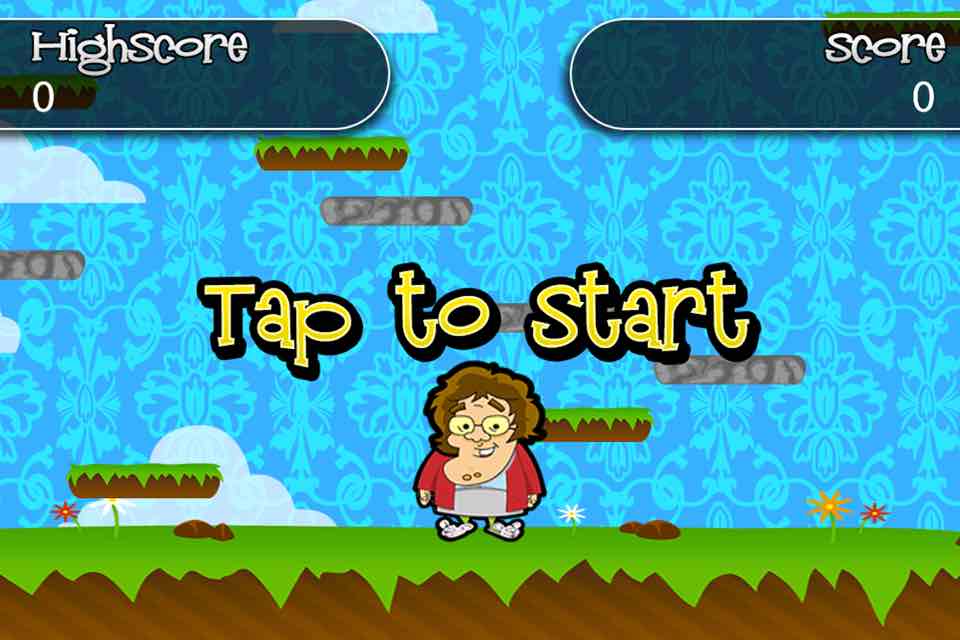 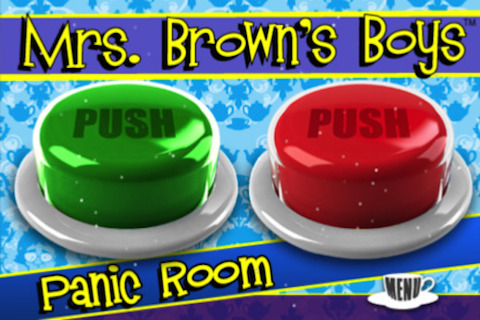 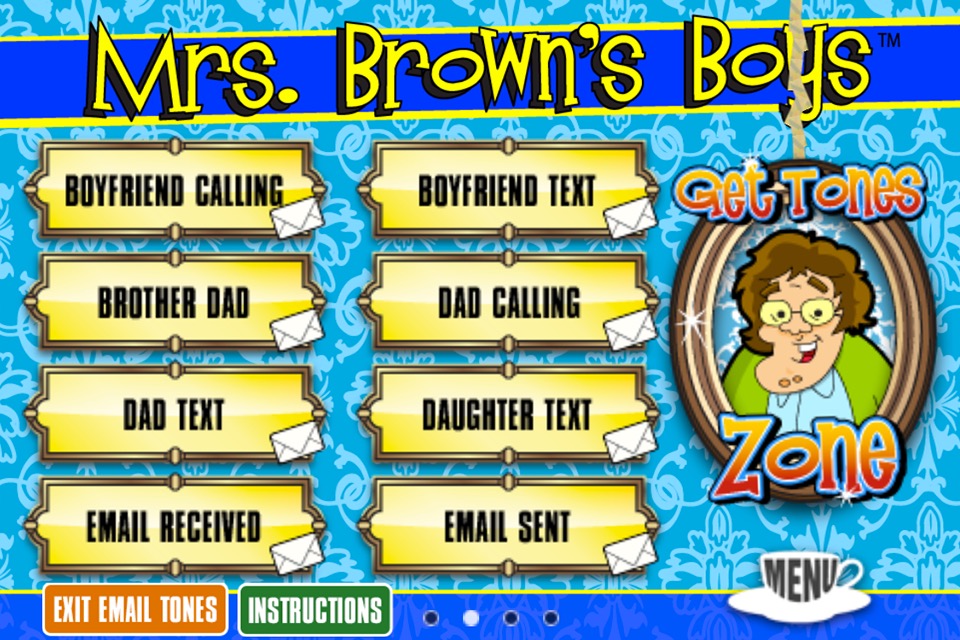 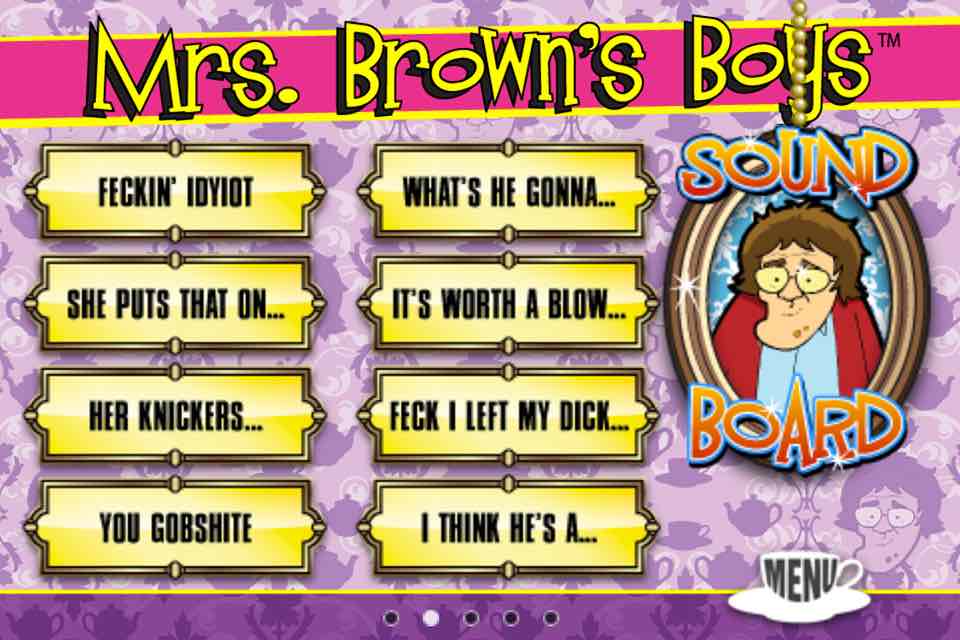 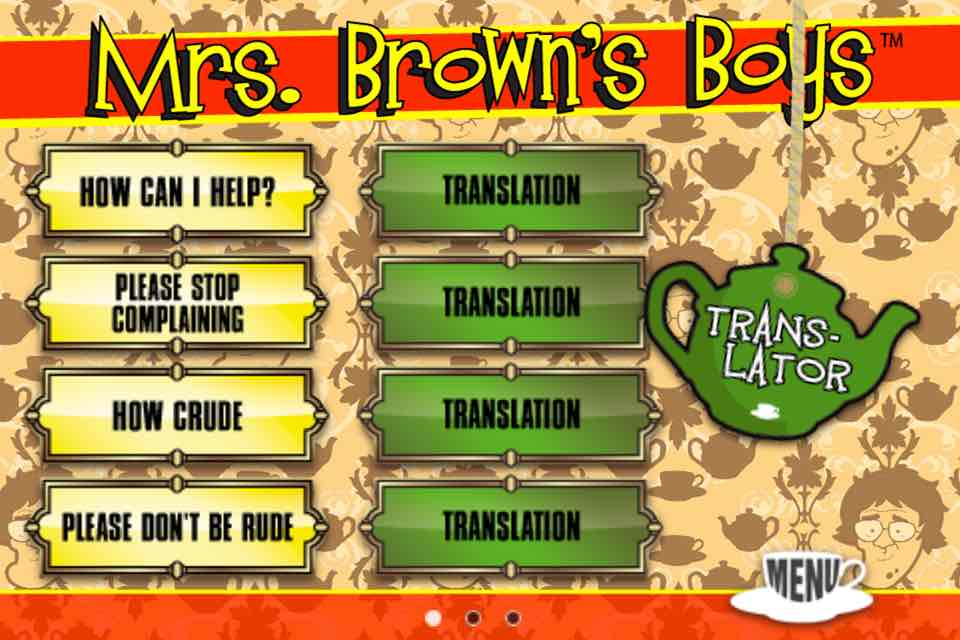 THE OFFICIAL MRS. BROWN’S BOYS APP
RECORDED BY THE MAMMY HERSELF!

Mrs. Brown’s Boys went straight to number one in the UK and Ireland dvd charts, BAFTA nominated for best situation comedy, with a sell out UK tour. You can now enjoy Mrs. Brown’s Boys App which contains:

Translator
Want to talk like Mrs. Brown? Then use the translator to hear how! Also features the voice of Cathy, Mrs. Brown’s daughter.

Mobile Zone
All these Mrs Brown tones come free with the app! Completely personalise your iPhone with your very own:

Panic Button
the panic button is to be used when someone is really starting to annoy you. You can decide if you want to be tolerant or NOT!

Jumpin’ Mammy (Game)
See what score you can reach as you jump to the clouds with Mrs. Brown’s game “Jumpin Mammy”. Mrs Brown will talk to you throughout the game, where you can gain extra points the higher you go and the more cups of tea you land on.

This application is packed with bundles of Mrs Brown brilliance, start enjoying today!

The Official Mrs Browns Boys App.
The client wanted an app creating where by end users could enjoy listening to all the sayings from the main actor of the hit TV show.

To make it more engaging the ‘sound’ environments were split up into sections; Ringtones, translator, text alerts etc etc. We then implemented a clean interface, whereby the user would be presented with a handful of sounds and the option to slide the screen to see more.

Further, users could select certain sounds and email the audio files to themselves to set as ringtones on their devices.

DBI produced the original Version 1 of the app, back in 2013. This was coded in Objective-C in Xcode – using the Cocos2d SDK library. However, when we cam to renew the app for 2015 (with new sounds etc), it was decided to re-engineer the entire code base to LUA using the Corona SDK.

Whilst the app may appear ‘simple’, we wanted to try and add some elements to engage the user. Behind the scenes we implement some physics attributes, using Box2d, joints and rope actions. We then made it so the user could ‘swing’ around the logos on each of the screens.

The client also wanted a mini in-app game for users to play. Back in 2013 we re-created the famous DOODLE JUMP game within the app and called it Mammy Jump. With simple tilt controls – simulating the original title.

Again, this was created using a physics environment, in which velocity base on the tilt direction of the users device would push our hero (mammy) in the right direction.

TV Adverts and Poster material
We also produced the TV advert promoting the app, along with various flyer and posters to promote the app. All artwork was produced in CMYK, using Adobe Illustrator and Photoshop – with the finished results prepared for the printers as high resolution PDF documents. Example of one of the posters produced.